Among many striking early twentieth-century photographs of men wearing white suits in far north-western Australia, the one below seizes attention. Four men of European descent soon to leave for a First World War battlefront appear in this photograph taken in the pearling port-town of Broome in c.1914, each dressed in impeccable white cotton drill suits.

The photograph is compelling because of how little its subjects reflect the knockabout-soldier stereotype associated with the Australian and New Zealand Army Corps. Instead of dishevelled khakis, each of the men wears a radiantly white patrol jacket buttoned all the way to the neck. Both the man standing on the left and other seated on the left exude an air of self-satisfied hauteur. One of the men has a starched stand-up collar. The other three wear detachable band collars fixed with pearl or pearlshell studs in a nod to the industry on which the Broome economy then relied.

Lorinda Cramer and I have written an article soon to appear in the journal Gender & History about white menswear worn in northwestern Australia early in the 1900s. The article explores the labour that went into making and laundering the masculine fashion for white suits in northwestern Australia – a fashion also found in tropical European colonies such as the Netherlands Indies, the British Straits Settlements and British India.

The article also explores who did this labour. In Broome and Darwin, most of the work was by men of Chinese (although some of Japanese) descent working extraordinarily long hours for tiny pay. There were also men from northwestern Australia’s First Nations who carted water and chopped the wood for the laundry coppers. They were paid only with rations and an allowance for lollies, cigarettes and perhaps a weekly trip to the local segregated cinema.

Back in the days before the new Australian government’s racist Immigration Restriction Act (1901) prevented wealthy families from importing Asian men to work for them as ‘houseboys’ in tropical Australia, the pearl buyer Ted Hunter (depicted seated in the middle of another striking photograph below) was said to have brought a Malay servant with him to Broome. One of the responsibilities of this servant was to blanco multiple pairs of white shoes for Hunter night so that he could change his footwear whenever it became smeared with red dirt over the course of the day.

The high-maintenance mode of fashion represented by tropical white suits scarcely fits into understandings of historical Australian masculinities or menswear. The latter are more often represented by wiry or burly figures in slapdash attire. The fashion for tropical whites thus points to the distinctive nature of northern Australia in the period: to its particular set of unequal labour, social, racial and colonial relations, and to the masculinity most encouraged and elevated there, invested in a certain kind of radiantly conspicuous consumption and air of easy hauteur.

Since the historical fashion for tropical whites seems exotic today, it also helps to reveal the way that dominant modes of dress also speak volumes about a society – not to mention how clothes help to make the man.

It is not clear whether Guinsberg picked up sartorial cues while riding as a jockey and spending a year in Goulburn Gaol for receiving stolen harnesses in his young adulthood. He certainly honed his style after his release from gaol in 1921. Over the next decade, he became a tuxedo-clad champion ‘adagio’ dancer renowned for his agility and panache.

Guinsberg spent a second stint in prison in Queensland in 1934. This term was for continuing in business after being declared a bankrupt. Guinsberg had been made bankrupt in Melbourne in 1930, but immediately afterwards he headed north to partner with his brother Israel in the latter’s Brisbane fruit-and-vegetable business. He also opened footwear shops in contravention of his order of bankruptcy.

By the time he was in his forties in the 1940s, Guinsberg had moved out of footwear and fruit-and-veg. He was now the owner-manager of a Fortitude Valley shirt-factory and various shirt and millinery shops in Brisbane’s Queen and Adelaide Streets, joining other Jewish Australians as a player in the clothing and fashion industries. Guinsberg was also a racehorse owner and big-time punter with the money to dress with as much spruce flamboyance as he pleased.

In 1945, Guinsberg was the star witness in the prosecution of a pawnbroker who had fraudulently sold him what he thought was a seven-and-a-half carat ring. Guinsberg had wanted to replace the five-and-a-half carat diamond he was already wearing with a stone of even greater quality.

Guinsberg had also made an accessory of his glamorous wife Mimi before their divorce in 1940. They had run millinery shops together until Mimi caught him womanising and went to court. No doubt the pair had made a splash in provincial Brisbane before their split: Guinsberg in dapper tailoring and diamond ring, Mimi in elegant pantsuits and platinum-blond hair.

If you know anything about Guinsberg or Guinsberg shirts, we would love you to share it on our Facebook page or via email.

‘Return of Prisoners Discharged To Freedom Or On Licence’, NSW Police Gazette, 19 January 1921, 42.

Little remembered today, Hollywood actor Cornel Wilde inspired a hairstyle first adopted by north Bondi surfers in the late 1940s before being taken up across Australia by fashion-conscious young men.

In mid-century parlance, Wilde was ‘husky’; a cross between hunky and buff. He became famous for his bare-chested action roles, but one of his two breakthrough performances in 1945 was as Aladdin in the cheesy orientalist spectacular, A Thousand and One Nights.

A New York critic panned A Thousand and One Nights as a ‘strictly bobby socks version of Aladdin’. Wilde looked ridiculous in an ‘Oriental zoot suit’, he wrote.The young men of Bondi thought otherwise. They seem to have revelled in Wilde’s tan-and-pink shoulder-padded shirt with the sleeves rolled high over bulging biceps, his blue trousers pegged at the ankles and falling in voluminous pleats from the waist.

The surfers of Bondi were even more appreciative of Wilde’s hair. He had a pile of curls on top, the back fuller than most Australian men wore at the time, and carefully groomed side-levers finishing just above his cheekbones.

According to young Bondi man Arthur Rea, he and other fans of the Wilde cut were not necessarily enthusiasts of the actor’s films. ‘Most of us go to his pictures, but only to look at his hairstyle’, he told the Sydney Sun in 1946.

The Sun’s interview with Rea was a sign of the media fascination with youth fashion that would explode along with postwar consumerism in the next decades. The publicity given to the Wilde style meant that it spread well beyond fashion-forward Bondi. Perth headlines in 1951 blared ‘You Too Can Be Bodgie or Cornel’ – while in 1954, another paper reported sightings of an Aboriginal stockman at a Darwin cinema sporting a Wilde haircut along with swank cowboy wear.

Do you know anyone who sported a Cornel Wilde cut or similar style in 1940s or ‘50s Australia? If you have memories or old photographs you want to share, get in touch or head to our Instagram page #coattalesofhistory

Bosley Crowther, ‘The Screen: A Thousand and One Nights Costume Show, With Cornel Wilde, Opens at the Criterion’,New York Times,12 July1945. 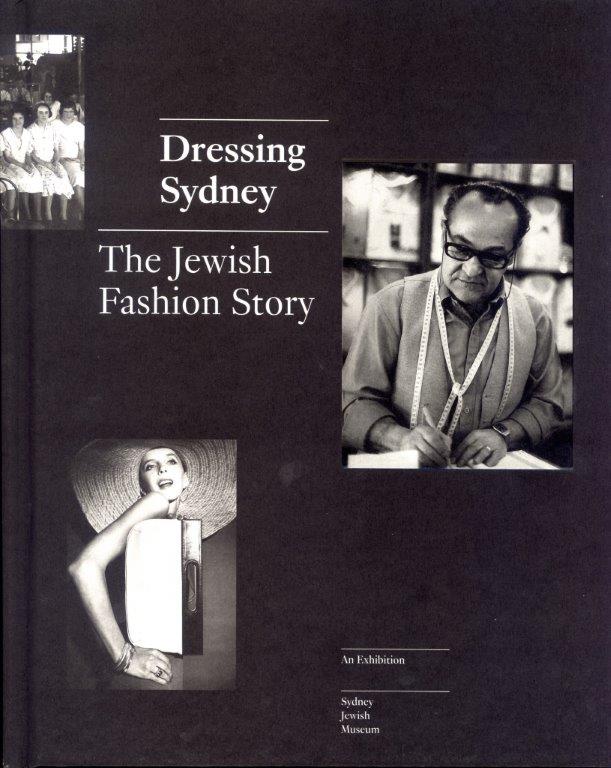 Along with documenting the Australian Menswear project’s research, one of my aims for this blog is to draw attention to already-existing research on twentieth-century Australian men’s engagement with clothes.

Unlike other places where a thriving corpus of publications on historical men’s fashion exists, the work in Australia is scattered and thin overall. With this in mind, my colleague Lorinda and I will often post about publications, exhibitions and online commentaries on twentieth-century Australian menswear, hoping to make the disparate more centralised.

I begin with a mention of the Dressing Sydney exhibition at the Sydney Jewish Museum (January 2013-January 2014). I must also mention the stunning hardcover book accompanying it by curator Robyn Sugarman and fashion historian Peter McNeil.

Dressing Sydney charted the impact of Jewish immigrants and their offspring on Sydney’s rag trade, using garments and photographs gifted or loaned by the families and an extraordinary 150 hours of interviews.

Sydney’s Jewish community – including Holocaust survivors – contributed in heavy number to the local clothing and fashion industries. They did so as workers, designers, owner-managers of factories and the founders of companies that included menswear labels Anthony Squires and Whitmont Shirts.

In some cases, Jewish immigrants drew on expertise developed in Europe when they joined the Australian schmatte (rag) trade. In other cases, they were simply responding to the fact that the industry depended on cheap immigrant and female labour and had no formal qualifications for entry.

Dressing Sydney was not the first foray into the history of Jewish input into the Australian clothing trade. The Australian Jewish Museum produced a comparable exhibition focused on Melbourne in 2001. An entry in the Berg Encyclopedia of World Dress and Fashion followed; ditto a memoir evocatively called Schmattes: Stories of Fabulous Frocks, Funky Fashion and Flinders Lane.

Dressing Sydney was distinctive, however, due to its rich grounding in oral history and cavalcade of artefacts, images of advertising and fashion shoots, photographs of hawkers, business owners and lovely candid snaps of workers on the factory floor. McNeil’s essay in the catalogue also remains a standout due to its detail about the development of Sydney’s clothing and textile industries.

Having had the fortune to co-edit a special issue of Fashion Theory and convene an international fashion studies symposium with Peter McNeil, I know firsthand his encyclopedic knowledge of fashion history. Given that his Dressing Sydney essay has so much to say about the history of Sydney clothing production, it is excellent that he has made selected pages available via the Open Publications site of his university, UTS. Dressing Sydney is also available for sale from the Sydney Jewish Museum’s online store.

Robyn Sugarman, Dressing Sydney – A Behind the Scenes Blog of Curating the Exhibition, accessed 1 August 2019.